CMD Missions Director, Friday Otuya paid a visit to the Central African Republic (CAR) in early March 2018. The purpose of his visit was to assess the opportunities and needs of the work there, encourage the team as they pursue the great task before them, and to emphasize among the missionaries, the longterm strategy of CMD in Africa.

He was at SCAD station, in Lobaye Prefecture where he encouraged the church among the Bayaka Pygmies, while also baptizing new converts into the faith. The team at SCAD were in high spirits, and expressed their determination to go further into the interior to reach the Unreached and Unchurched.

At Bagandu station, he worshiped with the church at Kenga forest; he baptized new saints into the fold, blessed the church, and prayed for sanctification, expansion and multiplication. He also met some workers trained by CMD back in 2016 and 2017; they are now witnessing Christ to their people with zeal and passion. He charged them to be strong in the Lord as they run the race set before them by reaching the interior of that country and beyond.

He further reminded our team of missionaries about the necessity to align their operations with the overall strategy and long term objectives of the Centre for Missionary Development. 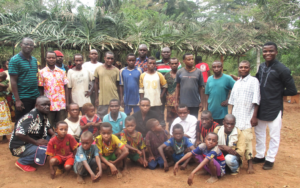 Head of the team in CAR, Brice N’gatte reassured him of their continuing determination to persevere and strive in reaching their people for Christ. 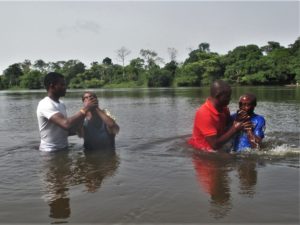 The entire endeavour was largely hitch-free, it offered valuable lessons that would be applied in future, and it opened up new perspectives on how the CMD team can harness the potential of that country in reaping the harvest of souls that await us. We thank the Lord.